The Eagles’ Take It Easy 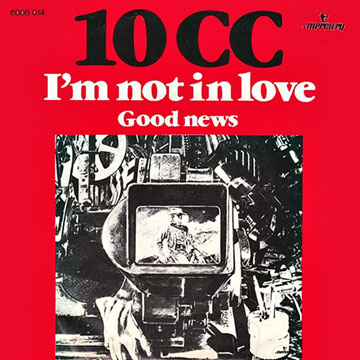 The song was written by group members Eric Stewart and Graham Gouldman. The idea for the song arose from Stewart feeling that he could say “I love you” over and over again to his wife, but it somehow didn’t mean anything even though he did love her. So he chose to say it in another way, which is that he was not in love with her. “I’m Not in Love” was released on 10CC’s 1975 album Original Soundtrack and as a single backed with “Good News” In the U.S. and Canada, it was backed with “Channel Swimmer.”  In 1975, “I’m Not in Love” went to #1 in the U.K., Ireland, and Canada. It rose to #2 on the U.S. Billboard Hot 100. It was in the Top 10 in Australia, Belgium, Germany, The Netherlands, New Zealand, Norway, and Switzerland.

“I’m Not in Love” is known for its unique backing track. It was build from chord loops and multi-tracks of the group’s voices. There were some 256 vocal dubs involved.  On the track are Eric Stewart (lead vocals, electric piano), Graham Gouldman (electric guitar, bass, backing vocals), Kevin Godley (moog synthesizer, backing vocals), and Lol Creme (piano, Backup vocals). The whispered vocal of “Be quiet; big boys don’t cry” was by Kathy Redfern, who was the secretary of Stawberry Studios.  Stewart, Gouldman, Godley, and Creme were proviced the musical effects and were on tne Synclavier system.

There have been covers of the song by Deni Hines, Olive, Petula Clark, Richie Havens, Dee Sharp-Gamble, Amy Grant, Tori Amos, Peggy Lee, Hervé Clark, The Pretenders, and so many more.

I’m not in love
So don’t forget it
It’s just a silly phase I’m goin’ through
And just because
I call you up
Don’t get me wrong, don’t think you’ve got it made
I’m not in love, no no, it’s because

I like to see you
But then again
That doesn’t mean you mean that much to me
So if I call you
Don’t make a fuss
Don’t tell your friends about the two of us
I’m not in love, no no, it’s because

I keep your picture
Upon the wall
It hides a nasty stain that’s lying there
So don’t you ask me
To give it back
I know you know it doesn’t mean that much to me
I’m not in love, no no, it’s because

The System has daily featured music from all sorts of genres of 1970s music. You’re welcome to listen to any of the 40+ selections in The System. Thank you for stopping by. Hope you enjoyed “I’m Not in Love” by 10CC.