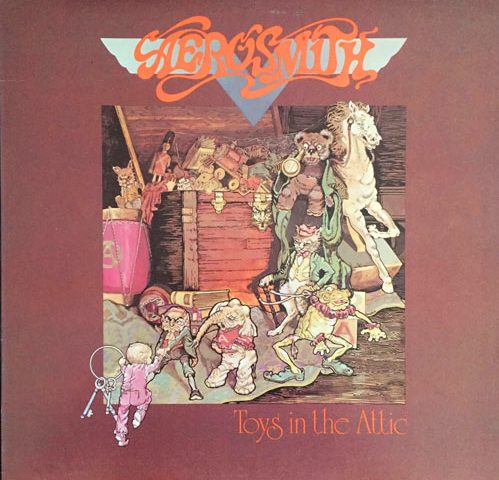 The song was written by band members Steven Tyler and Joe Perry. The lyrics are direct about young, well, walking experiences without being graphic so the song could be played on the radio. It all starts with a little kiss, as it were. The song was released on Aerosmith’s’ 1975 album Toys in the Attic and as a single and then re-issued in 1976 after Aerosmith’s album Rocks took off. And in 1976-77, it rose to #7 in Canada and #10 on the U.S. billboard Hot 100. This helped bring Aerosmith into the mainstream in the 1970s.

But wait, that’s not the end of the story. In 1986, the hip hop group Run-D.MC. performed a cover of the song with Steven Tyler  and Joe Perry. It was on their album Raising Hell and also released as a single. There was a new vocal by Tyler and guitar work by Perry, based on their 1975 recording, plus a sample of the original drum intro. This fortuitous cover became an international hit, boosted Aerosmith’s career, and brought rap into the mainstream. The Run-D.M.C. version charted in the Top 10 in the U.S., Canada, the U.K., Australia, Belgium, The Netherlands, New Zealand, Norway, and Switzerland. It was in the Top 20 in Germany, Ireland, and Italy. There have been successfully charting covers by String Cheese and the Sugababes and Girls Aloud collaboration.

There are different stories about the inspiration for the song. Part of it from their own walking experiences. Joe Perry developed the guitar riff and the band developed the track. At the time, Mel Brooks’s Young Frankenstein was playing. The film has a scene where Igor, played by Marty Feldman, tells Dr. Frankenstein (Gene Wilder) to follow him and “walk this way.” It’s an old vaudeville gag, and Dr. Frankenstein imitates Igor’s eccentric walk. The band thought it was funny. Tyler says that the title came from watching The Three Stooges on TV, and they had “walk this way” routines.

Of note, Joe Perry used a talk box on his guitar, which allows a guitarist to make vocal sounds by talking into a vinyl tube. It is one of the first times this device was used in a hit song. There followed many others to talk this way…

Here are the lyrics to “Walk This Way” by Aerosmith:

Backstroke lover always’ ‘neath the cover
‘Till I talked to my daddy he say
He said, you ain’t seen nothing
‘Till you’re down on a muffin
Then you’re sure to be a-changin’ your ways

I met a cheerleader, was a real young bleeder
All the times I can reminisce
Ah the best thing lovin’ with her sister and her cousin
Started with a little kiss, like this

So I took a big chance at the high school dance
With a missy who was ready to play
Was it me she was foolin’?
‘Cause she knew what she was doin’

I was a high school loser, never made it with a lady
Till the boys told me something I missed
Then my next door neighbor with a daughter had a favor
Took me just a little kiss, like this

So I took a big chance at the high school dance
With a missy who was ready to play
Was it me she was foolin’?
‘Cause she knew what she was doin’
When she taught me how to walk this way
She told me to

The System has daily featured music from all sorts of genres of 1970s music. You’re welcome to listen to any of the 40+ selections in The System. Thank you for stopping by. Hope you enjoyed “Walk This Way” by Aerosmith.