Roberta Flack’s Killing Me Softly With His Song 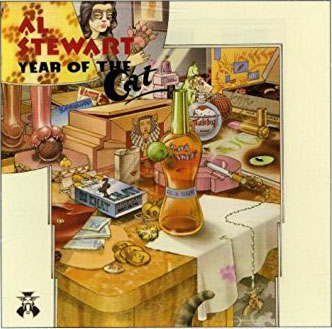 The song was written by Al Stewart and keyboardist Peter Wood.  In 1976, it was released as the title track on Stewart’s album Year of the Cat and as a single backed with “Broadway Hotel.” The riff for the song came from Wood, and Stewart found it pretty and haunting, so he decided to write lyrics to it. The story is that there were numerous stories for the music at first. One set of lyrics was about Tony Hancock, an English comedian who committed suicide. Another set was about Prince Anne riding off on the horse of the year. Then there was a set about a ginger cat. Cat, cat. And Stewart was watching the classic film Casablanca, which starred Humphrey Bogart, Peter Lorre, and Ingrid Bergman. So Stewart started to write about them — and about the mysterious woman who might get away. And then it got mixed with Vietnamese astrology. The Vietnamese Year of the Cat, which is the Year of the Rabbit in the Chinese Zodiac, comes every 12 years. Its overall vibe is a stress-free year (more or less). Although, the big musical hit from Casablanca was “As Time Goes By,” Stewart’s  “Year of the Cat” is the most popular song based on the film itself. (And Bogart’s presence haunts our 70s site Bogart Boogie Oogie.)

Here are the lyrics to “Year of the Cat” by Al Stewart:

She doesn’t give you time for questions
As she locks up your arm in hers
And you follow ’till your sense of which direction
Completely disappears
By the blue tiled walls near the market stalls
There’s a hidden door she leads you to
These days, she says, I feel my life
Just like a river running through
The year of the cat

While she looks at you so cooly
And her eyes shine like the moon in the sea
She comes in incense and patchouli
So you take her, to find what’s waiting inside
The year of the cat

Year of the cat

The System has daily featured music from all sorts of genres of 1970s music. You’re welcome to listen to any of the 40+ selections in The System. Thank you for stopping by. Hope you enjoyed “Year of the Cat” by Al Stewart.