The Temptations’ Ball of Confusion 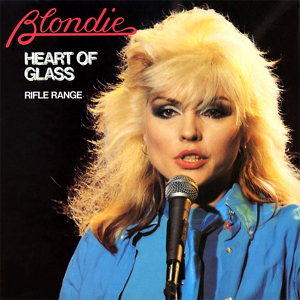 The song was written by Blondie members Debbie Harry and Chris Stein, who were a couple. They released on their 1978 album Parallel Lines as well as 7″ and 12″ singles in 1979. (There had been an earlier version recorded as a demo in 1975 titled “Once I Had a Love.”) The song is a plaint about a lost love. The twist is that it is a woman singing about leaving. The music brings Punk and Disco elements together. Harry has said that in their circle, disco was not cool, but they liked to experiment and did it more as a novelty item.

It was a very successful experiment. “Heart of Glass” had phenomenal success internationally. It went to #1 in the U.S., Australia, Austria, Canada, Germany, New Zealand, Switzerland, and the U.K. It was #2 in Ireland and South Africa, #3 in Sweden, #5 in Belgium, The Netherlands, and Norway, and #11 in Sweden. The record was certified 2x Platinum in Canada, Platinum in the U.K, and Gold in France, Germany, and the US. Wow.

The important line in the song where the singer realizes that the relationship is more trouble than it’s worth is “Soon turned out to be a pain in the ass.” U.S. radio did not like that line, so they changed it to “Soon turned out I had a heart of glass.”

The video for the song was done a little before MTV came on the scene. The video shows Blondie is in an empty disco, with lots of close-ups of Debbie Harry and the band. They did videos because Blondie was popular in Europe and Australia, so videos were a way they could be featured in those places without having to travel there. What a concept!

Another trivia tidbit is that they merged the CR-78 drum machine with drummer Clem Burke’s real drums. That was not an easy thing to do at the time.

Here are the lyrics to “Heart of Glass” by Blondie:

Once I had a love and it was a gas
Soon turned out had a heart of glass
Seemed like the real thing, only to find
Mucho mistrust, love’s gone behind

Once I had a love and it was divine

Soon found out I was losing my mind
It seemed like the real thing but I was so blind
Mucho mistrust, love’s gone behind

Once I had a love and it was a gas
Soon turned out had a heart of glass
Seemed like the real thing, only to find
Mucho mistrust, love’s gone behind

Lost inside
Adorable illusion and I cannot hide
I’m the one you’re using, please don’t push me aside
We coulda made it cruising, yeah

Once I had a love and it was a gas
Soon turned out to be a pain in the ass
Seemed like the real thing, only to find
Mucho mistrust, love’s gone behind

The System has daily featured music from all sorts of genres of 1970s music. You’re welcome to listen to any of the 40+ selections in The System. Thank you for stopping by. Hope you enjoyed “Heart of Glass” by Blondie.