Atlanta Rhythm Section’s So Into You 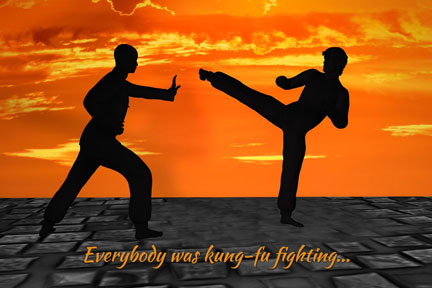 The song was written by Jamaican recording artist Carl George Douglas, whose professional name is Carl Douglas. Much of his career has been based in the U.K., and “Kung Fu Fighting” was produced by Indian-British singer, songwriter, and producer Biddu Appaiah, who goes by Biddu. The martial arts and martial arts movies were very popular at the time. Bruce Lee was a big star. The inspiration for the song, evidently, was that Carl Douglas had seen two kids in London doing their Kung Fu moves.

The song was originally a quickly recorded B-Side to Douglas’ song “I Want To Give You My Everything.” When the record label Pye heard it, they wanted “Kung Fu Fighting” as the A-Side. It was released in 1974, backed with “Gamblin’ Man.” It was also released on Douglas’ 1974 album Kung Fu Fighting and Other Great Love Songs.

This disco song, with its Asian riff, became one of the best-selling singles of all time. In 1974-75, it went to #1 in the U.S., Canada,  the U.K., Australia, New Zealand, Austria, Belgium, France, Germany, Ireland, The Netherlands, and South Africa. It went to #2 in Switzerland and #3 in Italy and Norway. The record earned Gold certification in the U.S. and the U.K.

Here are the lyrics to “Kung Fu Fighting” by Carl Douglas:

There was funky Billy Chin and little Sammy Chung
He said here comes the big boss, let’s get it on
We took a bow and made a stand, started swinging with the hand
The sudden motion made me skip now we’re into a brand new trip

The System has daily featured music from all sorts of genres of 1970s music. You’re welcome to listen to any of the 40+ selections in The System. Thank you for stopping by. Hope you enjoyed “Kung Fu Fighting” by Carl Douglas.