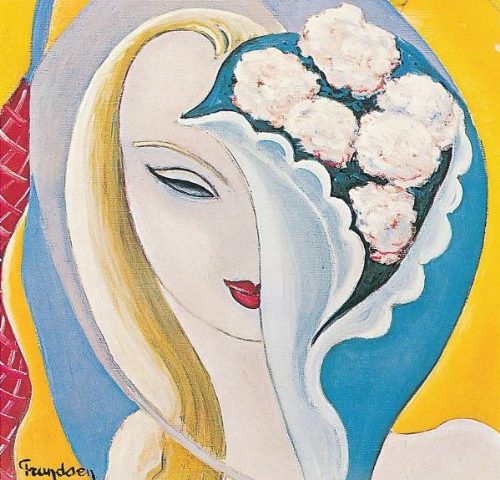 Derek and the Dominos formed in 1970 after Eric Clapton, Bobby Whitlock, Carl Radle, and Jim Gordon worked together on George Harrison’s solo album titled All Things Must Pass. They played small clubs all over Europe, with Clapton and Whitlock writing songs as they toured. While in France, the story goes,  Clapton met a girl, who was a Persian princess (of some sort), and she wore bell-bottoms. Evidently, she did not speak English and had to communicate through an interpreter. The relationship, such as it was, lasted about a week. However, supposedly she was the inspiration for the song “Bell Bottom Blues.”

Clapton and Whitlock (credited later) wrote the song in 1970, and it appeared that year on their album Layla and Other Assorted Love Songs. The cover for the album was painted by French artist Frandsen De Schonberg. The band was staying with his son Emile when Clapton met the bell-bottom-wearing princess. “Bell Bottom Blues” was also released in 1971 as a single backed with “Keep on Growing” and a re-released backed with “Little Wing.” (The story behind “Layla” is that it’s about Clapton’s unrequited love for Pattie Boyd, the wife of George Harrison. Ah, so many women, so little time.) On the track were Eric Clapton (vocals, guitar), Bobby Whitlock (Hammond organ, harmony vocals), Carl Radle (bass and percussion), and Jim Gordon (drums, tabla). Duane Allman has not joined them yet for “Bell Bottom Blues,” but he is other tracks on that album, including “Layla.”

Here are the lyrics to “Bell Bottom Blues” by Derek and The Dominos:

[Chorus:]
Bell bottom blues, you made me cry.
I don’t want to lose this feeling.
And if I could choose a place to die
It would be in your arms.

It’s all wrong, but it’s all right.
The way that you treat me baby.
Once I was strong but I lost the fight.
You won’t find a better loser.

Bell bottom blues, don’t say goodbye.
I’m sure we’re gonna meet again,
And if we do, don’t you be surprised
If you find me with another lover.

For another song by Derek and The Dominos: “Layla.”

The System has daily featured music from all sorts of genres of 1970s music. You’re welcome to listen to any of the 40+ selections in The System. Thank you for stopping by. Hope you enjoyed “Bell Bottom Blues” by Derek and the Dominos.