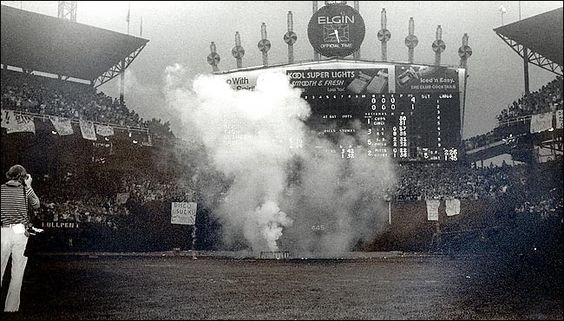 On July 12, 1979, there was a Disco Demolition Night at Comiskey Park in Chicago, Illinois. It was a twi-night doubleheader between the Chicago White Sox and the Detroit Tigers. Between the games, there was a promotion dreamed up by shock jock, anti-disco crusader Steve Dahl if 97.9 WLUP-FM. It was a lackluster season for the White Sox and a week before the All-Star break, so, the Sox’s officials thought it might be a good stunt to increase attendance, get a little PR, you know.

Chicago White Sox owner Bill Veeck was known for using promotions to boost interest.  He has said, “You can draw more people with a losing team plus bread and circuses than with a losing team and a long, still silence.” Strangely enough, back in 1977, the White Sox had a “Disco Night” in Park. In  1979, Bill’s son Mike Veeck was in charge of promotions. Bill was not so sure this would be a good one and checked himself into a hospital where he was undergoing some tests.

The promotion was that If you brought a disco record destined for destruction that night, you only had to pay less than a dollar. They hoped for about 20,000 attendees, which was about 5,000 more than their usual. Mike Veeck hired security for about 35,000. Between the games, they would collect the disco records, chant “disco sucks,” put the records in a box filled with explosives, drive it to centerfield, and detonate. And then on to ballgame #2.

It did not go in the orderly way planned. Evidently, 50,000 people showed up. Chaos. Centerfield was blown up and a bonfire raged. Not all records were collected and they were thrown as Frisbees. The crowds were all over the park. They destroyed the batting cage; they picked up and stole bases. The Chicago police arrived in full riot gear. The policed helped to control the crowd and arrested 39 people.  White Sox groundskeepers spent an hour clearing away debris, but the field was badly damaging. The manager of the Tigers, Sparky Anderson, refused to let his players play because of safety concerns and unacceptable playing conditions.

The upshot was that the White Sox forfeited that game 9-0 to the Tigers. The backlash against disco music did cause a decline in the playing and popularity of disco music.

There are those who believe that the backlash against disco was because that music was urban, associated with African Americans, Latinos, gays and lesbians. Others think that disco music, despite the popularity it received from the success of the Bee Gees and the film Saturday Night Fever, was on its way out anyway. Dahl claimed that the demolition wasn’t racist or homophobic. He felt it “a romp, not of major cultural significance.” Some people preferred the use of real instruments rather than the synthesized sounds of the studio.

While Disco Demolition Night 1979 remains one of the really disastrous promotions, it did not destroy the music. Disco music evolved and morphed into dance music, electronic dance music, house music, rave music, and hip hop.  The beat goes on.

The following video shows the event the characters involved.