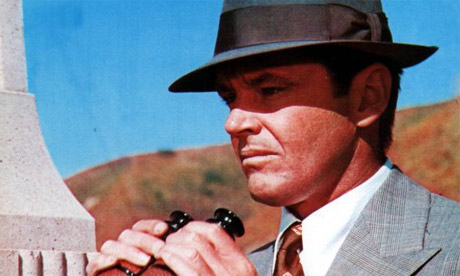 The 1974 movie Chinatown received accolades and awards in its own time and it  is considered one of the best films of all time on a number of lists, including those kept by  the American Film Institute. In 1991, the Library of Congress preserved it in the U.S. National Film Registry as being “culturally, historically or aesthetically significant.” Robert Towne received an Oscar for Best Original Screenplay. The film won Golden Globe awards for Best Drama, Best Direct, Best Actor, and Best Screenplay. Oh yes, it’s an amazing movie.

The American West is dry. Access to water and water rights have been  ongoing political battles. Robert Towne based his screenplay on the early 20th century California Water Wars that involved William Mulholland, the head of the newly formed Los Angeles Water Department, and Fred Eaton, the mayor of Los Angeles. These gentlemen felt that the growing city should consider the distant Owens River as a  source of water. The farmers and ranchers who lived in the valley were waiting for the Reclamation Service to complete an irrigation project there before they could use the water. Knowing they would need to put a stop to the project if they wanted access to the water, Mulholland and Eaton bribed a local Reclamation Service agent, took a peek at the plans, and then began to buy land and water rights in the Owens Valley area.

Mulholland made it appear to Los Angelenos  that this water source was very important to the city. However, he used the water to irrigate the nearby San Fernando Valley and increase the ROI made there by several of Eaton and Mulholland’s friends. The scandal was a perfect paradigm, of public corruption — use public funds and goods for private gain.

Chinatown is a metaphor for a situation that is inscrutable. It is impossible to fully fathom the depth of corruption going on. J.J. (Jake) , played by Jack Nicholson, is a private detective who had once been on the police force but is now pursuing mostly adultery cases. However, his investigations begun by Evelyn Mulwray (Faye Dunaway) uncover enormous political scandals and corruption, headed by her father Noah Cross (John Huston).  Towne based his famous exchange on a joke told him by an LAPD friend.

Evelyn: “What did you do in Chinatown?”
Jake: “As little as possible.”

One did very little because they could not understand the languages spoken and culture, so it was a way to avoid trouble.

In the original script, no scenes took place in Chinatown at all. In its final form, only the last scene of the movie is in Chinatown.

Chinatown was supposed to be the first in a trilogy. The second film The Two Jakes was released in 1990, but did not capture any love from the public or the critics. So the third movie Gittes v. never materialized.

A Little About Jake

Director Roman Polanski wanted to stay in the tradition of Raymond Chandler’s detective stories, so he shot the movie from the perspective of J. J. Gittes. And Jack Nicholson is in every scene in the film. To emphasize that we’re seeing things from the perspective of this character, Polanski often puts the camera behind him, so we look over his back and shoulders.

Polanski really did not cut Nicholson’s nose with a knife. It was a trick. However, they got tired of explaining how it was done and spread a rumor that it actually happened.

Towne originally wanted a happier ending. Polanski changed it, though. He said it was part of his despair after the horrific murder of his wife Sharon Tate. The last scene is the only one where Nicholson, Dunaway, and Huston appear all together.