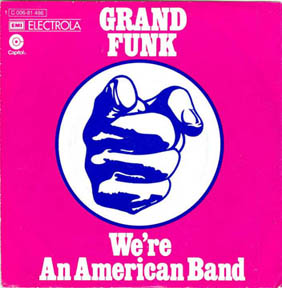 The song was written by the group’s drummer Don Brewer . He says that their manager kept saying, “Why don’t you just write songs about what youdo: you’re out there on the road, you’re going to this hotel, you go to different places, there’s people, you come into town…” So that was the subject matter of Brewer’s song. Many of things in the lyrics come from their tour for The Phoenix Album. For example, blues guitar player Freddie King would make his band play poker with him every night. The four young chiquitas were four groupies in a hotel lobby in Omaha, who were waiting to see the band. When Grand Funk was touring with British group Humble Pie, they were drinking at a bar one night, and Brewer proudly bragged about American rock legends, including Fats Domino, Elvis Presley, Little Richard, and Jerry Lee . Brewer said, “We’re an American Band.” And a title was born.

One bit of trivia is that during the first pressing of the records for the song, they were pressed on gold vinyl. This is also called virgin and vinyl and is see-through. It’s like giving everybody a gold record. 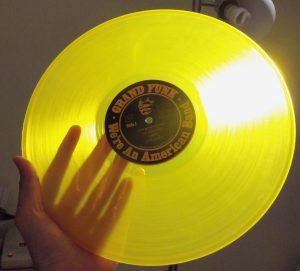 Grand Funk Railroad (aka Grand Funk) formed in 1969 in Flint, Michigan. The name was a take-off on the Grand Trunk Western Railroad, which ran through their home town.The lineup has changed over the years, and they continue to tour and perform.

Here are the lyrics for “We’re an American Band” by Grand Funk Railroad:

Out on the road for forty days
Last night in Little Rock put me in a haze
Sweet, sweet Connie, doin’ her act
She had the whole show and that’s a natural fact
Up all night with Freddie King
I got to tell you, poker’s his thing
Booze and ladies, keep me right
As long as we can make it to the show tonight

Four young chiquitas in Omaha
Waitin’ for the band to return from the show
Feelin’ good, feelin’ right, it’s Saturday night
The hotel detective, he was outta sight
Now these fine ladies, they had a plan
They was out to meet the boys in the band
They said, come on dudes, let’s get it on
And we proceeded to tear that hotel down

The System has daily featured music from all sorts of genres of 1970s music. You’re welcome to listen to any of the 40+ selections in The System. Thank you for stopping by. Hope you enjoyed “We’re an American Band” by Grand Funk Railroad.