Deep Purple’s Smoke on the Water 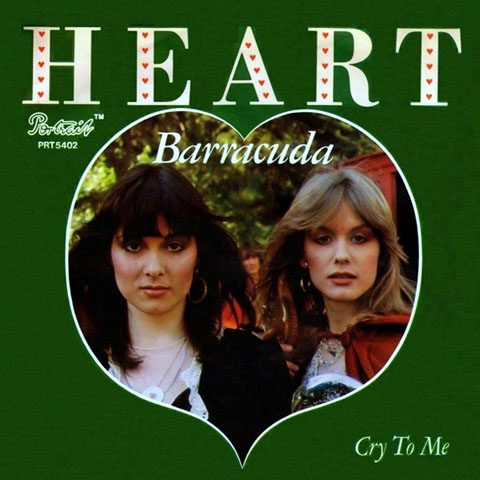 Well, a barracuda could refer to the predatory tropical marine fish with a slender body and large jaws and teeth. In the case of this song, it’s the secondary definition of a someone who uses aggressive, selfish, and unethical methods to reach a goal — in particular, a business goal. “Barracuda” was written by Ann and Nancy Wilson with guitarist Roger Fisher and drummer Michael DeRosier about the music business. At the time, Heart had been contracted to Mushroom Records.  Mushroom put an ad in the trade publications as a publicity stunt the lie that Ann and Nancy were having an incestuous affair. Heart discarded the album they were working on (Magazine) and went to CBS-Portrait Records to record their 1977 album Little Queen, on which “Barracuda” is a track.

Anyway, out of all of this rancor, “Barracuda” was spawned. It charted well internationally in 1977, rising  to #11 on the U.S. Billboard Hot 100, #2 in Canada, #1 in South Africa, and #8 in Germany. It was in the Top 40 in Australia, Austria, Belgium, The Netherlands, New Zealand, and Sweden.

Is the song hard rock or a proto-heavy metal? Well, the critics seem to consider it heavy hard rock with its notable guitar riffs and use of natural harmonics.

On the Little Queen album are Ann Wilson (lead vocals, flute), Nancy Wilson (acoustic and electric guitars, autoharp, mandolin, piano, vocals), Roger Fisher (lead guitar, mandolin), Howard Leese (acoustic and electric guitars, synthesize, piano, Moog bass, mellotron, mandolins, vocals), Steve Fossen (bass guitar), and Michael (drums, chimes, tabla, percussion, timpani). The group formed in Seattle, Washington, in 1973 (there are earlier forms of the group starting in the late 1960s with the two Wilson sisters at the center) and has been recording and performing for many decades in a variety of styles. The lineup has changed over the years.  The band is currently on hiatus, they say, and the sisters have been touring separately.

Here are the lyrics for “Barracuda” by Heart:

So this ain’t the end, I saw you again today
I had to turn my heart away
Smiled like the Sun, kisses for everyone
And tales, it never fails!

You lying so low in the weeds
I bet you gonna ambush me
You’d have me down, down, down on  my knees
Now wouldn’t you, Barracuda? Ohhh

Back over time we were all tryin’ for free
You met the porpoise and me
No right no wrong you’re selling a song, a name
Whisper game

“Sell me sell you” the porpoise said
Dive down deep down to save my head
You, I think you got the blues too.

All that night and all the next
Swam without looking back
Made for the western pools, silly silly  fools!

If the real thing don’t do the trick
No, you better make up something quick
You gonna burn, burn,  burn, burn, burn to the wick

The System has daily featured music from all sorts of genres of 1970s music. You’re welcome to listen to any of the 40+ selections in The System. Thank you for stopping by. Hope you enjoyed “Barracuda” by Heart.