Bob Marley and the Wailers’ I Shot the Sheriff 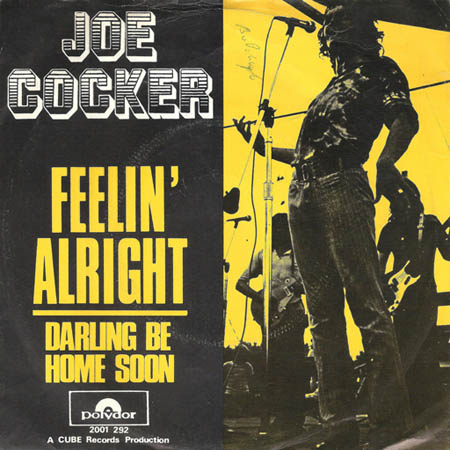 The song was written by singer, songwriter, musician Dave Mason, who at the time was with the English band Traffic. They recorded it for their 1968 album Trafffic. The band included Steve Winwood, Chris Wood, Jim Capaldi, and Mason. Joe Cocker’s version charted at #69 on the U.S. Billboard Hot 100 in 1969 and then re-charted at #33 in 1972. The personnel for Cocker’s version were Joe Cocker (lead vocals), David Cohen (guitar), Carol Kaye (bass guitar), Artie Butler (piano), Paul Humphrey (drums), and Laudir de Oliveira (percussion). The backing vocals were by Brenda Holloway, and Merry Clayton.

There have been numerous covers of the song, including ones by Mongo Santamaría, Grand Funk Railroad, Three Dog Night, Rare Earth, Lulu, Lou Rawls, Chairmen of the Board, the 5th Dimension, Gladys Knight & the Pips, the Jackson 5 alone and with Diana Ross, Isaac Hayes, and many more.

Joe Cocker was born in Sheffield, West Riding of Yorkshire, England. He was known for his gravelly voice, charismatic performances, and halting body movements as well as great covers of popular songs. He had many hits, including “With a Little Help from My Friends, “You Are so Beautiful, ” and “Up Where We Belong” to name a few. Cocker is on Rolling Stone magazine’s list of “100 Greatest Singers.” He died in 2014 at the age of 70.

Here are the lyrics to “Feelin’ Alright” by Joe Cocker:

Boy, you sure took me for one bad ride
And even now I sit and wonder why
That when I think of you I start myself to cry
I just can’t waste my time; I must get by
Gotta stop believin’ in all your lies
‘Cause there’s too much to do before I die

Don’t get too lost in all I say
Though at the time I really felt that way
But that was then, now you know it’s today
I can’t get off so I’m here to stay
Till someone comes along and takes my place
With a different name and, a different face

The System has daily featured music from all sorts of genres of 1970s music. You’re welcome to listen to any of the 40+ selections in The System. Thank you for stopping by. Hope you enjoyed “Feelin’ Alright” by Joe Cocker.