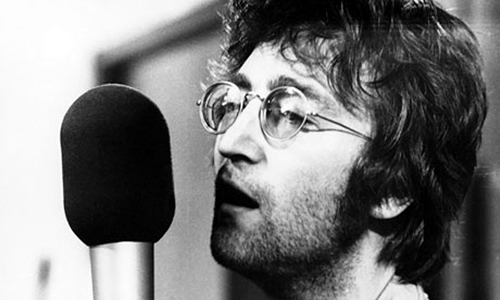 John Lennon wrote “Imagine” hoping for a world where the barriers  and divisions between people no longer impede the way to peace. It was inspired by several poems by Yoko Ono in her 1964 book Grapefruit.  He co-produced it with Yoko Ono and Phil Spector and released the song on his 1971 album also titled Imagine and as a single. The song was the best-selling single of his solo career, having international success.  In 1971-72, it went to #1 in U.S. Record World, South Africa, Italy, Canada, and  Australia. It went to #3 on the U.S. Billboard Hot 100 and #2 on U.S. Cash Box chart. (It was not originally released as a single in the U.K., but it in 1975, it was used to promote a compilation LP and went to #6 there.)  On the track were John Lennon (vocals, piano), Klaus Voormann (bass), Alan White (drums), and The Flux Fiddlers (strings).

“Imagine” was one of the most performed songs in the 20th century. There have been numerous covers, including versions by Madonna, Stevie Wonder, Joan Baez, Elton John, and Diana Ross. It is on Rolling Stone magazine’s list of The 500 Greatest Songs of All Time. It was inducted into the Rock and Roll Hall of Fame’s 500 Songs that Shaped Rock and Roll.

Here are the lyrics to “Imagine” by John Lennon:

Imagine there’s no countries
It isn’t hard to do
Nothing to kill or die for
And no religion, too
Imagine all the people
Living life in peace… You…

Imagine no possessions
I wonder if you can
No need…

And the world will live as one.

The System has daily featured music from all sorts of genres of 1970s music. You’re welcome to listen to any of the 40+ selections in The System. Thank you for stopping by. Hope you enjoyed “Imagine” by John Lennon.