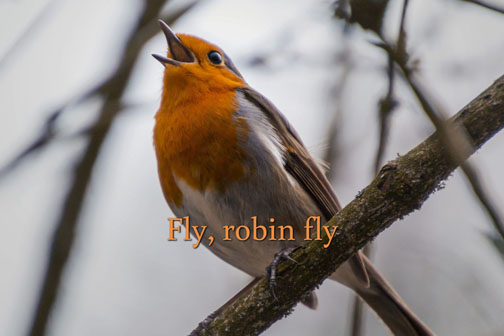 The song was written by Sylvester Levay and Stephan Prager.  It was recorded by the German group Silver Convention and released in 1975 on their album Save Me and as a single backed with “Tiger Baby.” There song is notable as a Billboard chart-topper with the fewest words (it is mostly an instrumental). Also, of note is that Silver Convention became the first German group to have a #1 song on the U.S. music charts. “Fly, Robin, Fly” won the 1975 Grammy Award for Best R&B Instrumental Performance. The song sold more than one million records and earned RIAA gold certification.

The story about the song is that Levay wrote the music based on a riff he had in his head while walking one morning. It was going to be called “Run, Rabbit, Run,” but there already was a song with that title, so they changed it.

The song went to #1 on the U.S. Billboard Hot 100, Hot Disco Singles, Hot Soul Singles, Cash Box, and Record World. It was also #1 in Canada. It went to #3 in Germany, Italy, and Belgium. It was within the Top 20 in Austria, The Netherlands, New Zealand, Sweden, Switzerland, and the U.K.

The group was formed in Munich by producers Sylvester Levay and Michale Kunze. Levay’s nickname was “Silver,” which is part of the inspiration for the group’s name. They first used female session vocalists Gitta Walther, Lucy Neale, Betsy Allen, Roberta Kelly, and Jackie Carter. Once they could no longer be just a studio group because of their success, they had Penny McLean, Ramona Wulf, and Linda G. Thompson as the public face of the band. That lineup soon changed. Silver Convention was active until 1979.

Here are the lyrics to “Fly, Robin, Fly” by Silver Convention:

The System has daily featured music from all sorts of genres of 1970s music. You’re welcome to listen to any of the 40+ selections in The System. Thank you for stopping by. Hope you enjoyed “Fly, Robin, Fly” by Silver Convention.