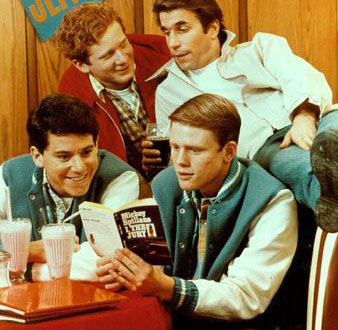 Nostalgia is the wistful, sentimental yearning for things, people, and places of the past. The origins of the word come from the Greek for “homecoming” and “pain.”So nostalgia is sometimes an ache for a former time. The 70s had its share of nostalgia for earlier decades, particularly the late 50s and early 60s. And so the sitcom Happy Days, which aired from 1974 to 1984, filled a need.

Happy Days was a spark from the fireworks of the TV show Love, American Style. One of the 1972 episodes titled “Love and The Newscasters/Love and The Happy Days” contained a story about Richie Cunningham, his family, and friends. The cast for the segment included Ron Howard, Marion, Ross, and Anson Williams. It’s set back in the 1950s, and a family gets their first TV set. Their teenage son Ritchie along with his friend Potsie want to use it to attract girls. Ah, young romance.

Happy Days was not the only one to look back. There was the 1973 film American Graffiti.  The film was directed and co-written by George Lucas, who  reflected on the youth culture a decade earlier. The movie takes place in Modesto, California, in 1962. The cast included Ron Howard, Cindy Williams, Steve Bolander, Richard Dreyfuss, Paul Le Mat, Charlie Martin Smith, Candy Clark, Mackenzie Phillips, Harrison Ford, Wolfman Jack,  and oh, so many more.

Happy Days  and American Graffiti and were not alone in bringing alive the public’ interest in the 1950s and 1960s. There were other films filled with such nostalgia, including the The Lords of Flatbush (1974), Cooley High (1975), and Grease (1978). The Lords of Flatbush is a coming of age story about a gang in Brooklyn circa 1958. It starred Henry Winkler, Perry King, and Sylvester Stallone. Cooley High is set in Chicago in 1964, and the teens learn some difficult life lessons. Its cast included Glynn Turman and Lawrence Hilton-Jacobs. The film Grease was based on the 1971 musical of that name by Jim Jacobs and Warren Casey.  This romantic comedy takes place in the 1950s and depicts the life of  Rydell High School students Danny (John Travolta) and Sandy (Olivia-Newton-John). The soundtrack album was the second-bestselling album of 1978. (It followed the soundtrack album to Saturday Night Fever, which also starred John Travolta).

And elsewhere in music, there was Don McLean’s epic song “American Pie” about the 1959 deaths of Buddy Holly, Ritchie Valens, and The Big Bopper. McLean called it “the day the music died” The music didn’t die, of course, as we explore all the wonderful rock, R&B, dance music, etc., but McLean looked back upon the late 50s and 1960s, thinking America might be headed in the wrong direction.

Also, there was the success of the group Sha Na Na. They had taken their name from some of the nonsense doo wop syllables of the 1957 song “Get a Job” by The Silhouettes. Sporting leather jackets, ducktail and pompadour hairdos, and a New York street attitude, they had performed at the 1969 Woodstock festival and had successful records and performances throughout the 1970s. From 1977 to 1981, they hosted the Sha Na Na  syndicated variety show.

Why the nostalgia? The 1970s was a pivotal decade for cultural change.  Some of the big issues included divorce, rights for minorities and women, and the questioning of gender identity. Many of the ideas of the 1960s counterculture made it into the mainstreams political currents — with a conservative backlash in full force.  All of these things were bubbling under the surface in the 50s despite the media’s images of  well-suited cigarette-smoking organization men and well-coifed suburban wives, who supposedly only worried about wax buildup on their kitchen floors. And these things erupted in 60s with its riots, assassinations, and anti-establishment anti-war drugged hippies. Perhaps people wanted to look back an earlier time, as shown in Happy Days. There was the nuclear family, the circle of friends, the community, the hangouts…

As the lyrics to the theme song to Happy Days tell us, “These days are ours / Happy and free (Oh Happy Days).”