The Temptations’ Papa Was a Rollin’ Stone 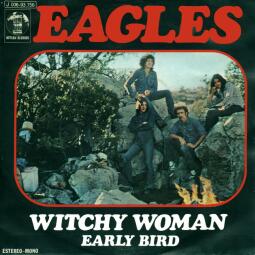 The song “Witchy Woman” was written by group members Bernie Leadon and Don Henley. Leadon had begun work on the song while still a member of The Flying Burrito Brothers, and he took it with him when he joined The Eagles. While both claim that the lyrics describe a certain number of women they knew, the story is that Henley at the time was reading about Zelda Fitzgerald, the wild wife of author F. Scott Fitzgerald. Zelda was the quintessential flapper and a bit loco. Whatever the inspiration may have been, they released the song first on their 1972 album Eagles and then as a single, backed with “Early Bird.” And, in 1972, the song went to #9 on the U.S. Billboard Hot 100.

Here are the lyrics to “Witchy Woman” by The Eagles:

For another song by The Eagles: “Take It Easy.”

The System has daily featured music from all sorts of genres of 1970s music. You’re welcome to listen to any of the 40+ selections in The System. Thank you for stopping by. Hope you enjoyed “Witchy Woman” by The Eagles.